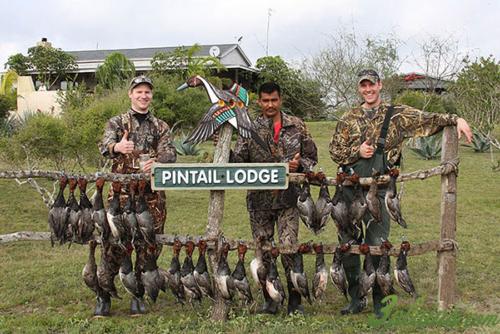 We flew in to Brownsville Texas and then the lodge General Manager picked us up and drove us to the lodge. It was a interesting trip to say the least. The road in San Fernando Mexico was beat to hell and blowing shocks and tires seemed to be a daily occurrence for the locals. I think in the hour drive to the coast there was only a few thousand potholes.

We flew into the Brownsville-South Padre Island Airport where the the Pintail Lodge Manager picked us up at. We filed up for gas and  grabbed a few roadie’s before we hit the Mexico border and we were on our way.

Oddly enough, for Mexico being as dry as it usually is it was raining the entire trip down to the Lodge.

The border guards entering in Mexico were actually quite nice to us, as I watched other cars getting torn apart (well not literally). I felt quite comfortable being with the lodge manager since he seemed to know the border guards quite well. They shook our hands and we were on our way. It was a 3 1/2 hour road trip to the Pintail Lodge, which is located in San Fernando Mexico on the Laguna Madre in the Gulf of Mexico.

We drove south on the Mexico interstate which was a little crazy. The interstate highway has two lanes on both sides and a lane in the middle which is the passing lane. When you are passing traffic in your lane, you are sharing the passing lane with the other side. It’s a little sketchy, but the lodge manager said it was piece of cake. I guess I’m trained after all of these year being on minimum maintenance roads stuck in snow drifts and what not. We had few roadies with us, so we were OK.

We arrived in the town of San Fernando and then headed east for the coast. I couldn’t figure out why there were several cars with tires tied to their roof’s. After we got further on the road to the lodge I figured out why. The road was sketchy at best. Pothole after pothole. We had to go off the road in several areas because the road was beat to hell. I see why Ben was telling me why they had so many blown shocks on the F-150’s they have down there.

We were about 10 minutes from the lodge and Carlos called the lodge and mind you, the rain had stopped and it was sunny at this point. I wasn’t quite clear what he was saying because my espanol was very weak. I did hear margaritas in the mix, so I figured it was drinks and food. Mango Margaritas and steak nachos were waiting as we exited the truck. First class all the way.

I grabbed a mango margarita and the plate of nachos and headed to casita #6 which was outside the lodge. (lodge layout photo). We quickly grabbed our gear and headed right for the flyboats. It was 2:30pm and a short 25 minute drive we were sitting in our duck blind on the saltwater Laguna watching ducks fill the sky. Our guides called in the ducks and almost wanted to shoot several times, but the guides were really aliment about good shots. We limited out in 2 hours and picked up the ducks right before sunset. We cracked a few beers and headed back the lodge.

We got back the lodge, cleaned up and there was a group from Florida that was staying at the lodge that my booking agent had booked. We had a stellar meal and played poker late into the night.

Dan (the lodge head guide) took us inland the freshwater ponds which was only a 45 minute drive from the lodge. The 3 of us found a nice pond and all surrounded it and had plenty of shooting with the many species of ducks. We collected around 20 ducks and when we came off the property we were greeted by some locals and followed the vehicle into a small town of Praxedis Balboa.

The streets were muddy from the rain the night before. The town was no more than 6x5 blocks and was pretty run down. There was a group of about 8 guys had a animal handing up and looked like they were drinking beers (mind you it was 9am). The group gave us dirty looks and we continued on.

We drove a few more blocks to the north side of town. Dan had a discussion with a few of the locals, which seemed like a heated discussion. This went on for 20 minutes but sitting the back seat it seemed like hours. Luckily, we had some mini coronas to keep us company. I noticed Dan back up quite quickly during the conversation and eventually he hopped back in the truck and we were on our way again. He didn’t say much until we followed the truck back to the house that was had the lamb hanging up. When we arrived the locals had smiles on their faces and I asked Dan what the deal was. I found out that we hunted the wrong property and he had to pay them off, so obviously the group was thrilled about their new revenue source. They were so excited, they even invited us to sit on the porch with them and drink their beer. We declined but thanked them.

The guys set to party all day because they had planted their crops the week before so they were excited about the huge rainfall the received so they were going to party all day. Any other day, I would have blown off the duck hunt and sat their with a bunch of strangers who I couldn’t communicate with. Could have been interesting.

We were up at 5am the 2nd day and hit a new spot in the Laguna with our new guide Chavo. We saw only redheads all day. I was expecting to see pintails, but Chavo said they were probably inland in the freshwater ponds. We limited out quite quickly and were back at the lodge before 11am.

So Tony (guide), decided to take us quail and dove hunting inland. We drove about a hour and a half past San Fernando, checked out Tony's buddies deer farm on the way. Then hit the dove fields. The doves were pretty steady and we shot several boxes. It was pretty impressive for Mexico, but not Argentina by any means, but impressive.

Pintail Lodge was one hell of a trip. Period. 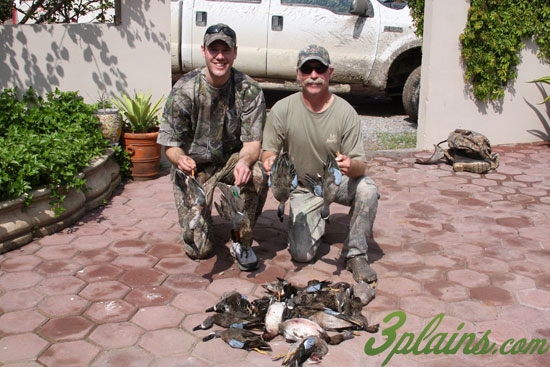 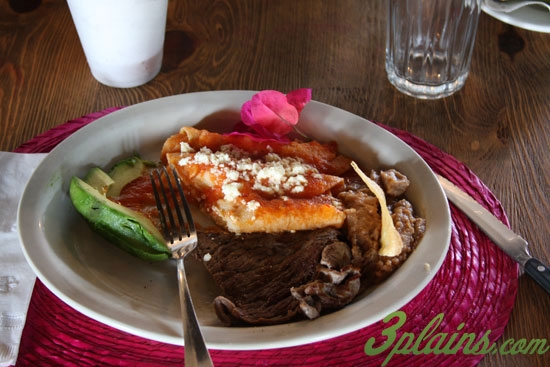 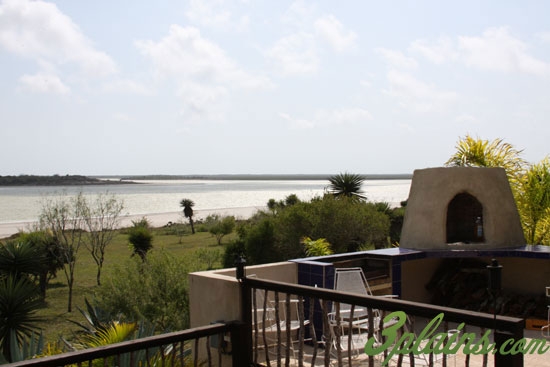 Rear deck of the Pintail Lodge. 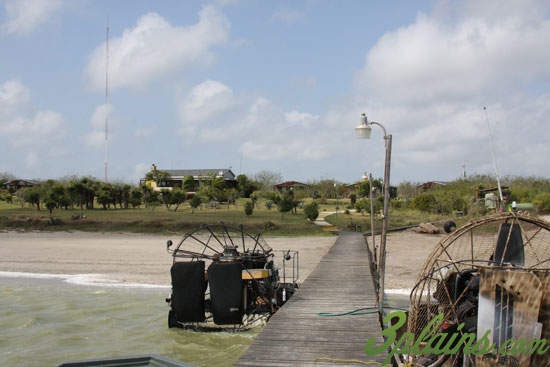 Flyboats at the Pintail Lodge. 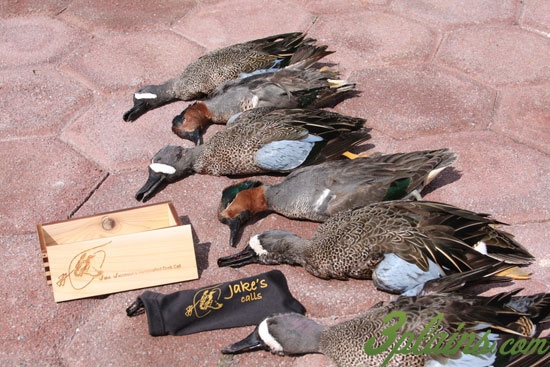 Ducks from the Freshwater ponds. 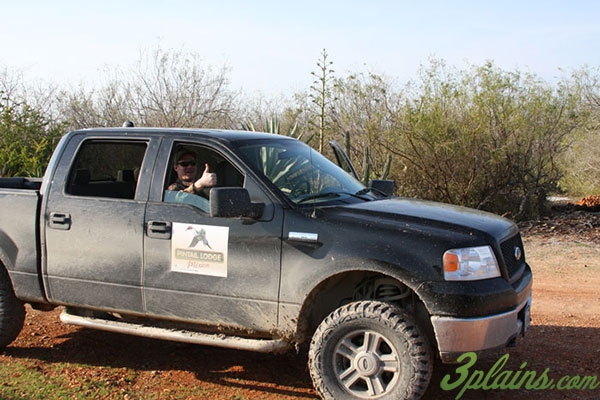 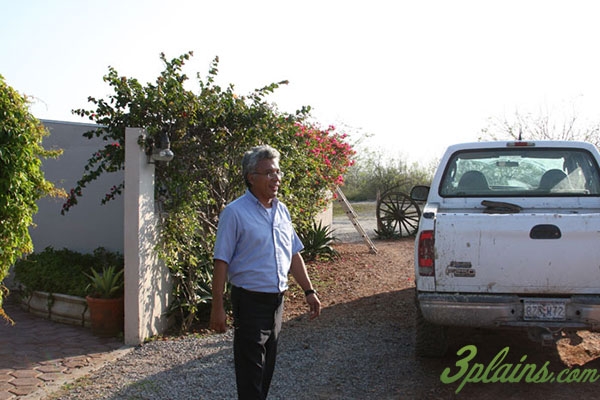 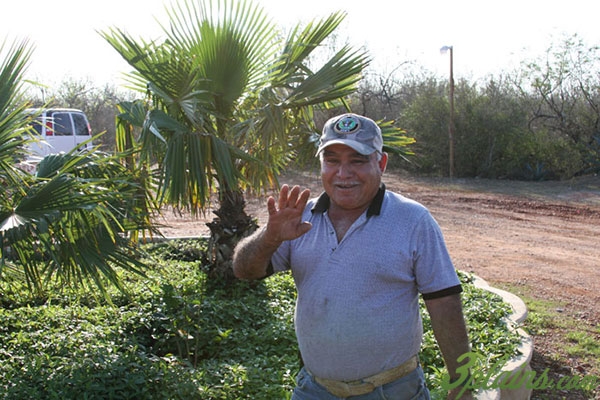 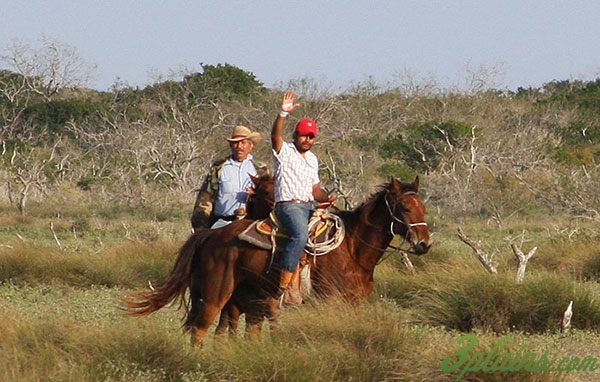 Driving around the countryside. 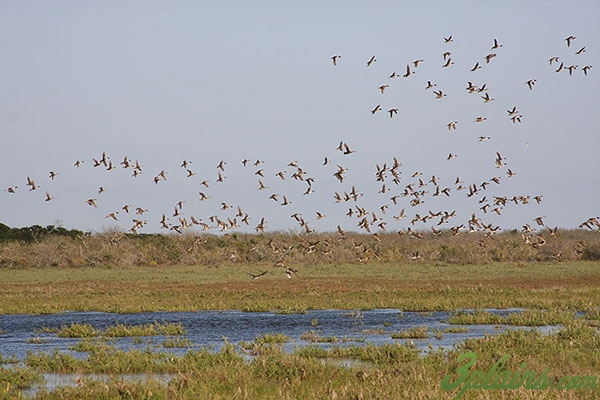 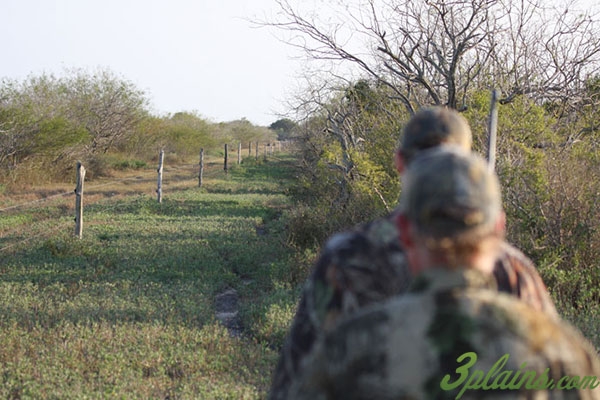 Stalking Javelinas with Ben and Dan 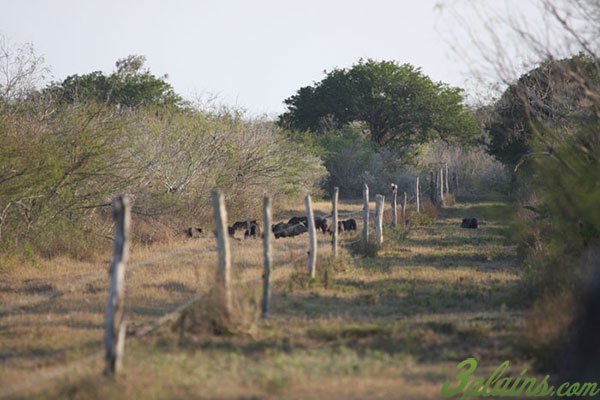 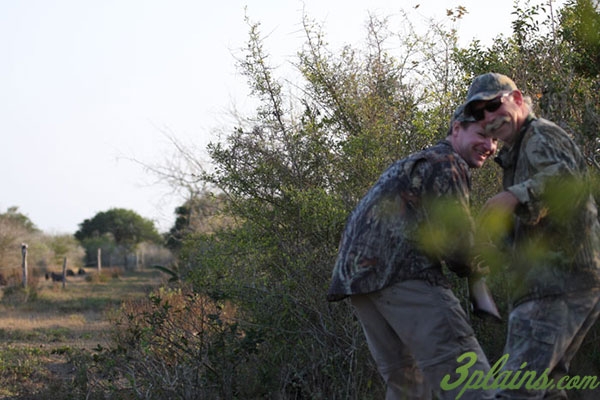 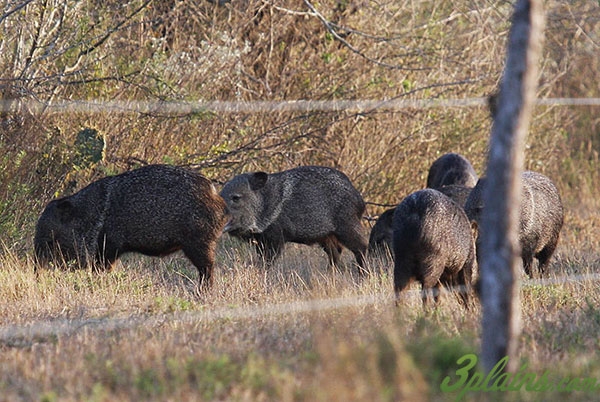 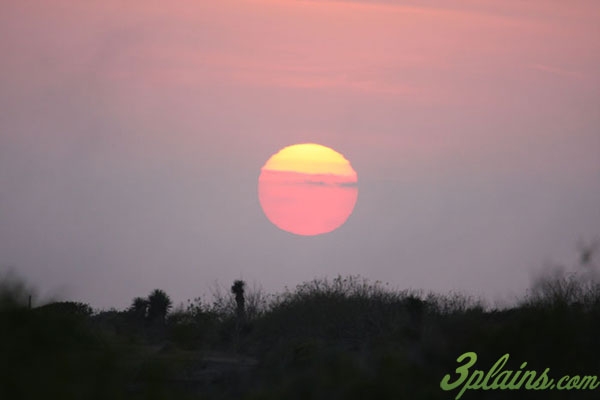 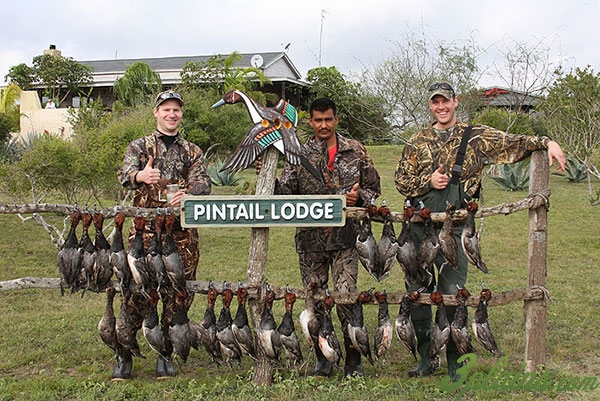 Day 2 with my Agent Ben, Chavo our guide and myself 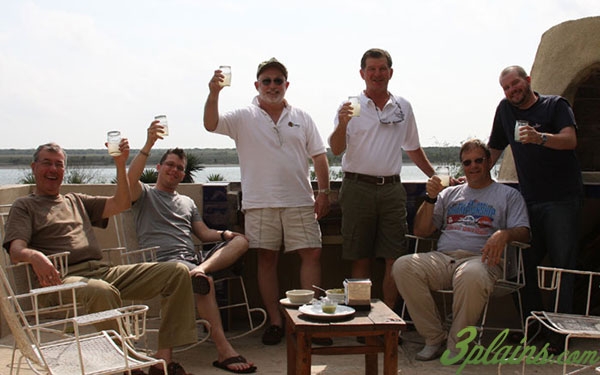 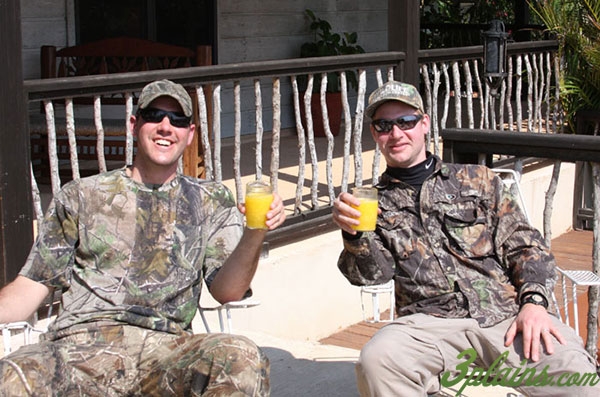 Myself and Ben drinking Mango Margaritas 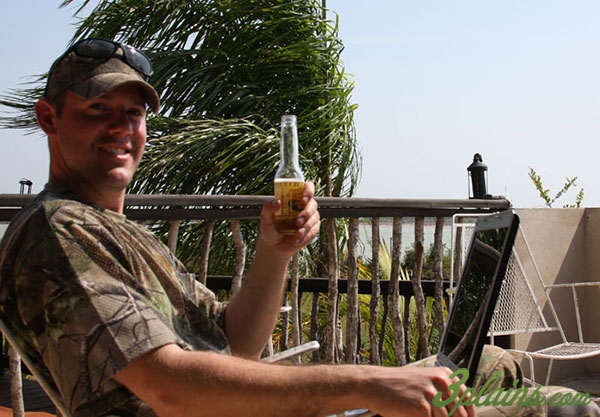 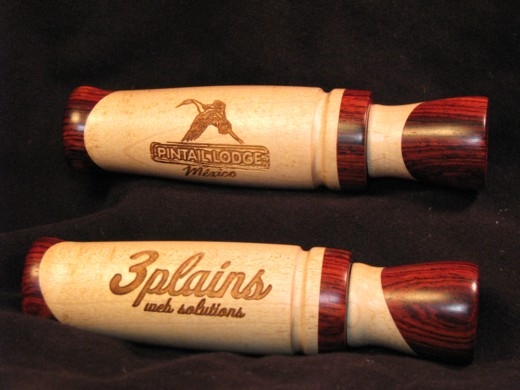 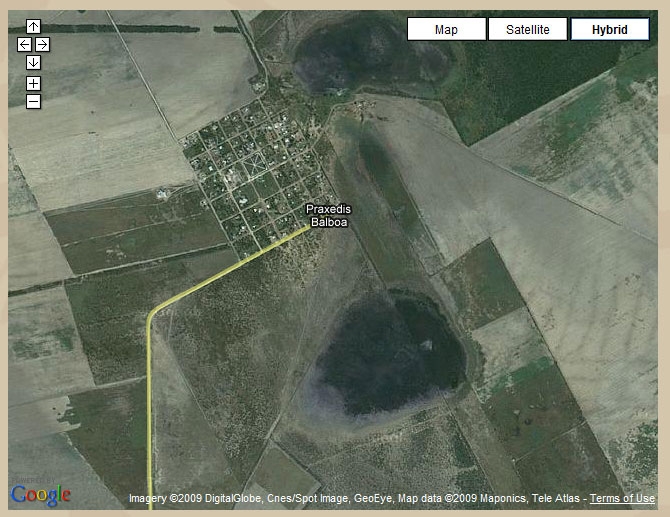